Patrice Lawrence is a British writer and journalist, who has published fiction both for adults and children. Her writing has won awards including the Waterstones Children’s Book Prize for Older Children and The Bookseller YA Book Prize.

The work was launched at Hay Festival Online festival on the 25 May 2020. The story, by Patrice Lawrence, is set in the not too distant future when London is running low on water…

More information about the Hay Festival and the Trans.Mission II project. 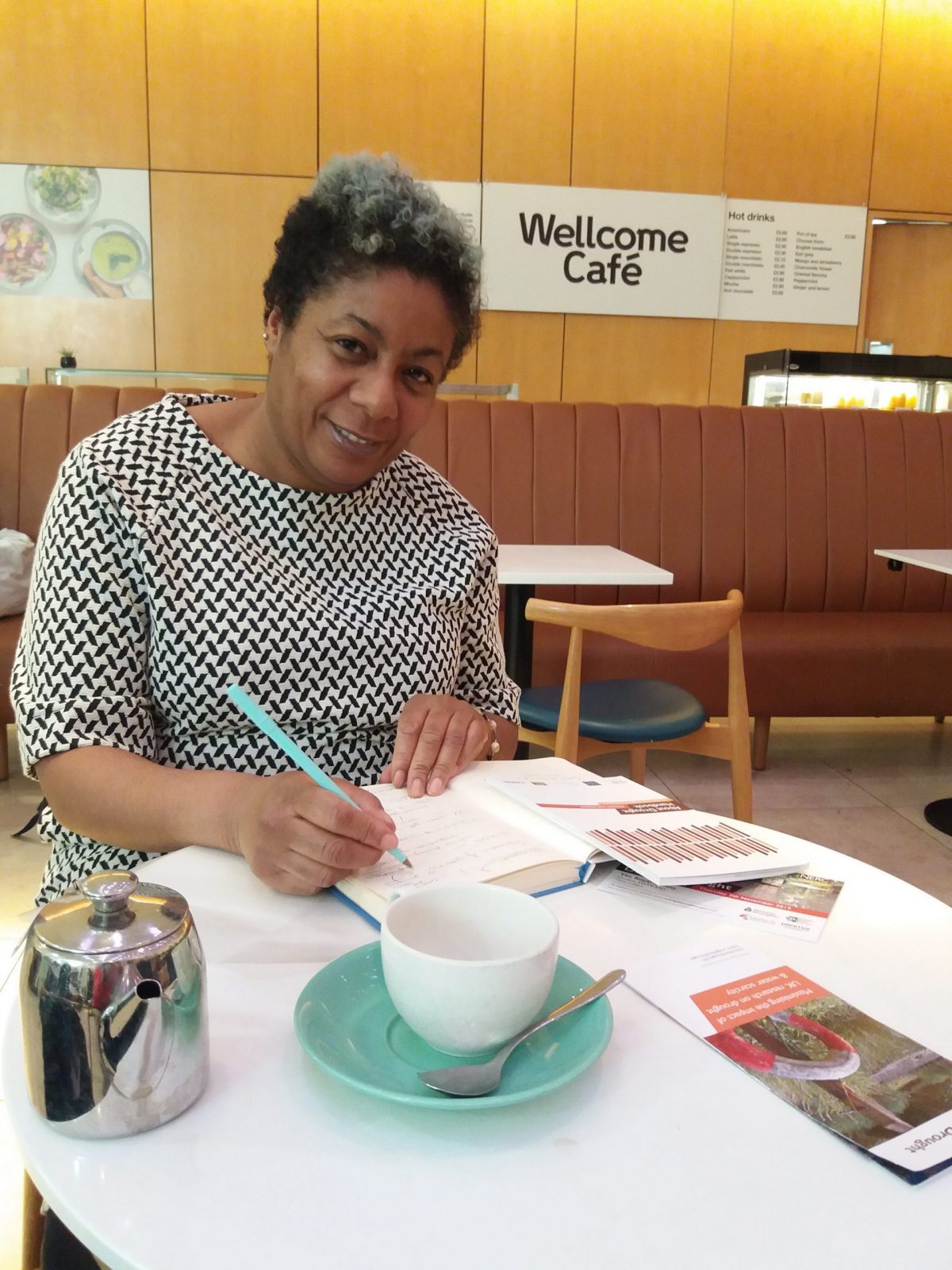 An award-winning author specialising in teen fiction is writing a story based on About Drought and Drought Risk & You (DRY) research for the world-famous Hay Festival.

Patrice Lawrence, whose novel Orangeboy won the Bookseller Young Adult Prize and the Waterstones Prize for Older Children’s Fiction, has been partnered with About Drought through Trans.MISSIONII, a joint initiative by UKRI NERC and Hay Festival.

About Drought and DRY have already won plaudits for their innovative approach to research, data gathering and communications through storytelling, song, animations, video, cartoons and an educational book for primary school children. Patrice has been meeting with our researchers to plan a creative piece of writing aimed at starting conversations about drought with teenagers and young adults. It will be showcased at this year’s Hay Festival held in Hay-on-Wye, Wales, from May 21-31.

Renowned for gripping, contemporary writing, often set in black working-class communities, that connects with traditionally hard to reach young adult audiences, Patrice is finding it both stimulating and challenging to work with About Drought.

We met in the bustling Wellcome Collection café in London, swelled by shoppers and commuters sheltering from a late afternoon downpour and next to the Wellcome gift shop’s eclectic display of furry toy microbes, ‘earwax’ fudge and science-themed board games to talk about Patrice’s progress so far.

She immediately ‘confessed’: “I have no scientific background and I haven’t written about science before, so I have no idea why Hay chose me but part of the joy for me in writing is the sheer nosiness!

“I have met with Prof Lindsey McEwen, Dr Sarah Ayling and Dr Jill Thompson from the DRY project to talk through the messages from About Drought’s research and I’m now entwining them into a piece of creative writing.

“Scientists think differently from authors, I’m picking up little details and I am trying to work out how much creative licence I can have. I want to create characters that reflect the types of science in About Drought and I have been thinking ahead to 2050 – what will be different in the lives of those readers, surprising things that might have become precious and valuable – like water? Will the buildings they live, learn and work in be designed differently to cope with drought? Will we be eating different things? I want to weave those everyday differences into a very realistic portrayal of what life will be like and how we will be using water.”

Although the starting point to this story is very different for Patrice, the process is familiar. Her fiction for teens and young adults is careful not to talk down to readers and is not shy of tackling relevant issues such as crime, racism, housing and ‘lovely’ young characters who nevertheless do bad things, including knife crime.  Patrice is committed to working in schools, encouraging and inspiring young people from all backgrounds to read fiction and to write their own, regardless of their skills in spelling and grammar. While most of her books are set in London where Patrice now lives, she grew up in Sussex in an Italian-Trinidadian family.

With many books for children of all ages and adults to her credit, not to mention awards, Patrice has a successful formula for approaching each project. The approach for About Drought’s Trans.MISSIONII story is no different. She explains: “I always start with characters, I need to know who I am writing about, what the beginning situation is and the end. Then I play with the middle.

“I am writing it as a monologue, a first-person short story set in 2050 and narrated by a teenage character. I would love a young person to read it at the Hay Festival.  Young people’s voices are great. I spend a lot of time on buses, listening to young people chat to each other to capture their voices.

“What motivates me is engaging with teenagers and I do lots of work in schools with marginalised teens. They are not a ‘hard to reach’ audience, it is more that they are not reached in the right way.”

Patrice’s story will be performed / read at the Hay Festival which will also feature two other research project and artist collaborations – one from Colombia and the other from Peru. All three are aimed at communicating cutting edge science to new audiences through new methods. A video version will also be available.

Andy Fryers, Sustainability Director of Hay Festival, introduced Patrice to About Drought. He said: “We are delighted with this collaboration between the award-winning author Patrice Lawrence and the About Drought research project. Wherever we are in the world, Hay Festival is a home for storytellers, a space for writers and readers to come together and explore the biggest challenges of our time. Trans.MISSIONII offers a new platform for collaboration between storytellers from two different worlds: artists and scientists. We hope that by building this shared space for engagement at the cutting edge of environmental research with NERC, we can find new ways to imagine a better future together.”

Read more about the research, watch videos and listen to podcasts at www.AboutDrought.info