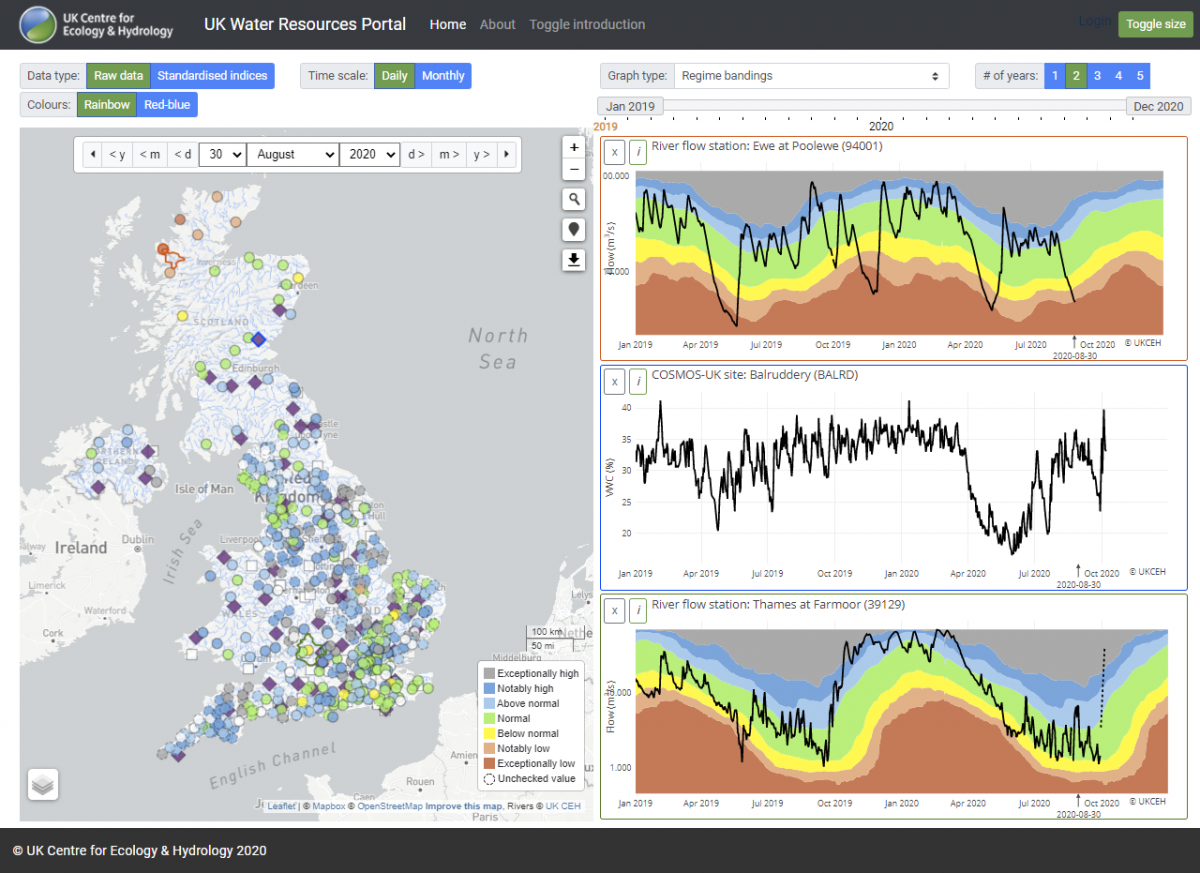 A year on from the launch of the UK Water Resources Portal, it is being used as a valuable and reliable real-time water monitoring tool by environmental and water managers.

It makes use of very recently published real-time river flow data from the Environment Agency (EA) and puts it in the context of longer term water availability, using data from the National River Flow Archive based at the UK Centre for Ecology & Hydrology (UKCEH), including knowledge about drought indicators that have been developed through the About Drought programme.

It includes standardised indicators for rainfall (Standardised Precipitation Index), river flows (Standardised Streamflow Index) and groundwater (Standardised Groundwater Index), but allows users to switch to actual values, which can make them easier to understand. Indices can be compared between locations with very different rainfall and between times of year or be calculated over different time frames, depending on the user’s requirements.

Matt Fry, Environmental Informatics Manager at the (UKCEH), manages the data workstream of the About Drought knowledge exchange project. His focus has been on co-designing the tools to put the research programme’s data into the hands of users in an accessible and meaningful way. He says:

You do not need technical skills to use the UK Water Resources Portal. Anyone with an interest in current water resources or drought conditions can use it – from policymakers to members of the public, businesses to farmers and regulators to consultants. It really helps to raise awareness of the status of river flows and rainfall, particularly during drought episodes, and we believe it is an excellent communications tool for all sorts of end users and decision makers

Jamie Hannaford, Principal Investigator of About Drought and Principal Hydrologist at UKCEH, adds:

“The UK Water Resources Portal is a big advance in real-time data availability.”

The UK Water Resources Portal is just one of the many user-friendly data products from About Drought.

Read more in the online About Drought Handbook.

About Drought has given people creating water policies and strategies, face-to-face access to scientists at the forefront of drought research through a series of workshops held around the UK. Tracey Dunford, who has worked in water resources for Wales for 20 years, attended a wide range of workshops organised by MaRIUS and DRY, returning to Cardiff to share information about the programme’s latest datasets and communications research with her colleagues

She says: “All the Drought and Water Scarcity and ENDOWS events I went to were extremely useful. I have been feeding back to my colleagues on the various outputs and they have been considering how to incorporate them into their decision making. The workshop About Drought held for NRW and the Welsh Government in Cardiff was especially useful as it was targeted to the Welsh audience.

“All our drought leads in NRW across Wales attended, including colleagues from biodiversity, fisheries, water resources, water quality, forestry and policy. It helped to engage people’s interest across our whole organisation and keep us all up-to-date with the current science.”

The Natural Resources Wales/Welsh Government Workshop was held in December 2018, with delegates hearing directly about the research and outputs from About Drought and inviting them to help shape the final phase of activity. Initially the delegates heard from NRW who introduced the areas of their organisation that are most likely to be engaged with About Drought, which then gave way to introductions from the About Drought team.

ENDWS Principal Investigator, Jamie Hannaford from the Centre for Ecology & Hydrology (CEH) introduced the programme. The agenda covered Water Supply with Dr Helen Gavin from the Environmental Change Institute at Oxford University, Environment with Dr Nevil Quinn (University of the West of England) and Dr Francois Edwards (CEH), and Agriculture with Prof Ian Holman (Cranfield University). Following these introductions, the floor was opened for discussions and Q&A, to further discuss next steps for NRW’s and the Welsh Government’s involvement.

Engaging with experts in Wales

A separate meeting was held with NRW community colleagues in early 2019 with Prof Lindsey McEwen, Ruth Larbey and Emma Weitkamp of the DRY (Drought Risk & You) Project, working with communities and business.

“These two helped to really engage the interest of my peers and colleagues who deal with drought in Wales, for instance our Hydrology and Agriculture Leads are now in direct contact with CEH and Cranfield University, providing their feedback on, for example, the UK Drought Portal, and with UWE to provide feedback on the environmental drought report cards,” says Tracey.

“Our next stage is to consider all the data and outputs that have come out of About Drought and take stock of how we can use it. We need to put it into the context of Wales – for example, what are the drought impacts in Wales and the sectors most at risk? What does it mean for our natural resources including land, water and forestry? It can be easy to get overwhelmed by all the evidence.

“During 2018’s prolonged hot dry weather we found the UK Drought Portal and the monthly Hydrological Outlooks useful, for example, for collating the Standard Precipitation Index triggers.” Being able to sit in a series of workshops around the same table as About Drought’s leading experts behind the data sets, has been invaluable for Tracey and for the programme team as well.

Tracey says: “It’s been beneficial both ways, not only did I get to know about so many things – including the drought communications work – but I was able to explain to the researchers that what works for England isn’t always necessarily right for Wales. Drought planning isn’t always the same, some of the policy and governances are quite different.

“I am concerned about losing contact with everyone now the programme has ended. Will I have ability to still contact people if we don’t understand something or we want a bit more background?

“The briefing papers and one-pagers on topics have been very useful but I need to think ‘How is that useful for Wales? What are the most likely drought impacts? Where will they be? What are the short, medium or long-term impacts?’ As an organisation we in NRW need to take that forward.

“It would be good to have it packaged up for Welsh policy, a synopsis of how drought affects Wales rather than topic by topic. In terms of decision-making we are re-visiting how we ‘do’ drought in Wales and we are going to find the About Drought datasets useful now that we are evolving our drought policy.”