“Since September 2018 we have been providing bespoke hydrological forecasts for the Environment Agency’s area teams based on their reasonable worst-case scenarios and stress test scenarios … it is a real success story.”

A key need addressed by About Drought has been improved access to early warning information, especially for hydrological forecasting.

Since 2013 a Hydrological Outlook had been provided by the Centre for Ecology & Hydrology (CEH), the Met Office and BGS, producing a static document that gives a 1-page summary for the UK as a whole, followed by regional and national information. But that did not allow users to access a forecast for the particular river in the UK that they were interested in.

Under About Drought that has become possible. Our project IMPETUS aimed to improve drought forecasting for decision-makers, building on information gathered at a host of stakeholder workshops to establish current practices and their needs across water supply, health, power, agriculture, navigation and recreation.

It developed a new methodology of forecasting and the follow-on project ENDOWS gave researchers the opportunity to develop IMPETUS’ methods. Now an insight into hydrological conditions over the coming three months, with likely trajectories for flows in 300 rivers around the UK and groundwater levels is available.

Jamie Hannaford, ENDOWS’ Principal Investigator and Principal Hydrologist at CEH, says: “The science was done in IMPETUS. We tested the methods, validating them to see how reliable and accurate they are around the country and at different times of the year.

“Then in ENDOWS we opened up the forecasts and operationalised that system to the extent that these hydrological forecasts are now available in the first few days of every month.

Since the summer of 2018 we have worked with a very wide range of stakeholders, providing them with forecasts for the river catchments that are relevant and ensuring that they meet user needs. In last summer’s drought conditions when many stakeholders needed reliable information about what would happen next, they have told us that these forecasts were very useful.”

The forecasts have been provided to a wide range of users, including water companies, the Environment Agency (EA), Natural Resources Wales, the Scottish Environmental Protection Agency, the National Farmers’ Union, energy industry and the Canal & River Trust.

Jamie adds: “Since September 2018 we have also been providing bespoke hydrological forecasts for the Environment Agency’s area teams based on their reasonable worst-case scenarios and stress test scenarios. They have been used internally and for National Drought Group briefings – it is a real success story.

“In the dry spell of Summer 2018 we started providing hydrological outlooks to Yorkshire Water who wanted to specifically look at the likelihood of reaching certain flow thresholds for their internal management, and we came up with a bespoke outlook for them.

“These are just two examples that illustrate the benefit of having the extra ENDOWS knowledge exchange and synthesis funding for the programme. It has enabled the excellent science from IMEPTUS to fulfil its potential, it gave researchers the time to hear directly from stakeholders how it could be used, to refine our outputs to make them user-friendly, for example through data visualisation.

“We listened and as a result they were able to use them to access better information in a live situation in the 2018 drought. Users said they were pleased to see that this project produced such useful information, and that there is a pathway for this science to be continued after ENDOWS, through the Hydrological Outlook.” 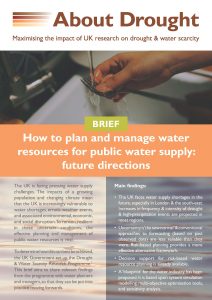