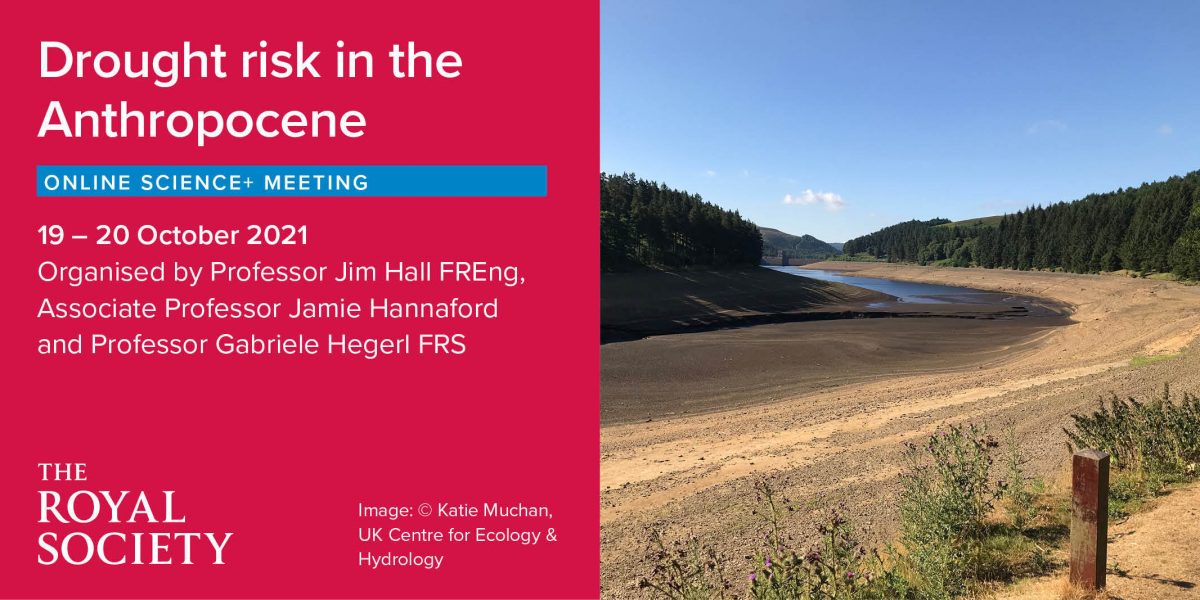 Taking place online on the 19th and 20th October 2021 the event is free to attend (advance registration essential).

Register for the event

Droughts and water scarcity jointly pose a substantial threat to the environment, agriculture, infrastructure, society and culture and their impact and prevalence are increasing driven by the climate crisis and increased water demand.

This Science+ meeting will explore scientific understanding of changing drought risk and examine drought impacts on the environment, people and the economy. Policy-makers, practitioners and scientists will discuss policy options for management of droughts in the future.

Speakers at the event include practitioners and researchers from across the world, making this a truly global event to discuss our adaptation to the Anthropocene in regards to drought and water scarcity.

More information about the event, the programme and registration details are available on the Royal Society’s website.

The environment work stream has developed five ecosystem-based report cards to communicate the effects of drought in an accessible way. The report cards are a synthesis of existing knowledge and new research within the programme. The ecosystems are:

The report cards capture the latest, cutting edge data from the programme and designed to be used by all, including the general public. The series summarises current and future aspects of water scarcity in the main ecosystems of the UK and cover the ecosystem responses, future scenarios and potential for drought management. 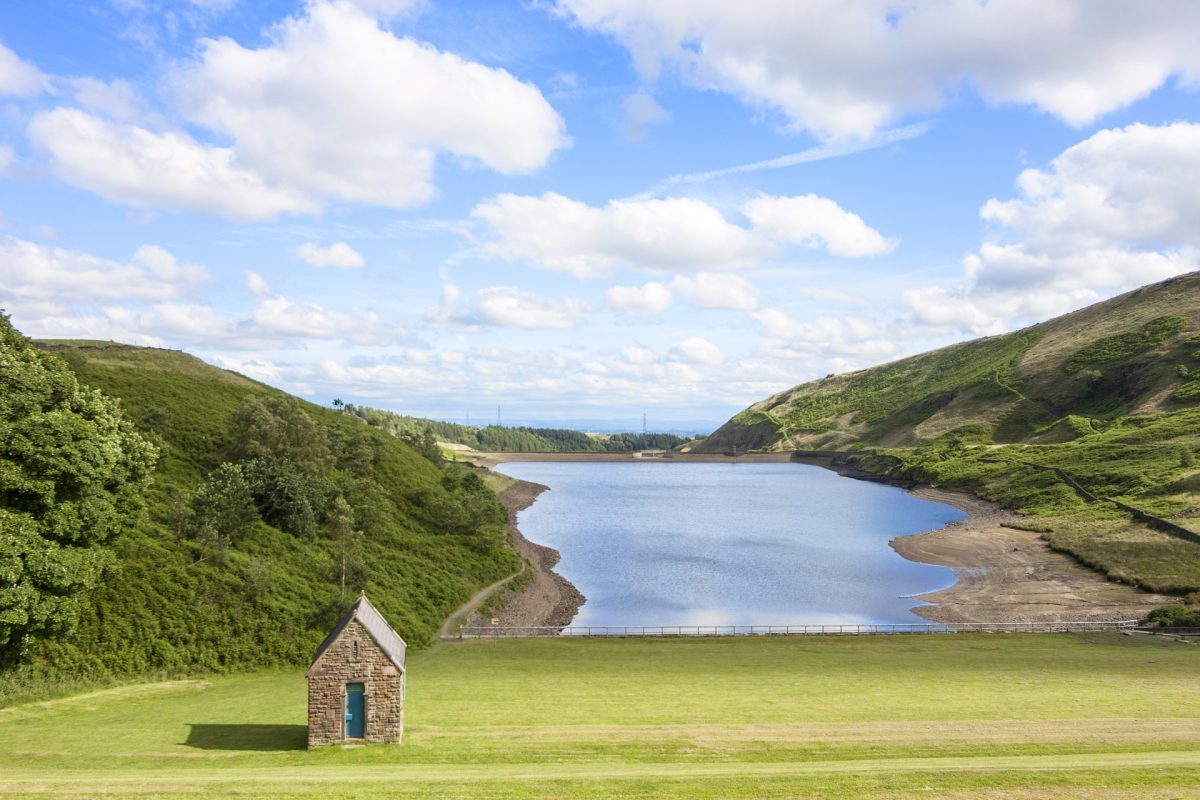 Experts from the About Drought project have given updates on the recent changeable weather we’ve been seeing in the UK and further afield.

The team at the UK Centre for Ecology & Hydrology (UKCEH) released a blog post which focused on the hydrological transformation following the wettest February on record, which soon turned into one of the driest springs on record. Low soil moisture and river flows at the end of May have resulted in impacts on agriculture and the environment, and heightened concerns over water resources over the longer term.

“There is now an increasing risk of reduced crop yields and potential water use restrictions.”

Find out more by visiting the UKCEH blog post which also highlights the UK Water Resources Portal, one of the outputs from About Drought.

Adding to the debate, Professor Len Shaffrey at the University of Reading contributed to a blog post exploring the reasons as to why we are seeing such changeable weather.

The article explores whether the persistent high-pressure “blocking” weather systems which bring clear, dry conditions for many days or weeks, are becoming more frequent. These systems are particularly synonymous with heatwaves and drought in summer and bitterly cold conditions in winter.

Len explains that changes in the Arctic, “might influence the frequency of blocking events”:

“The theories suggest that as the Arctic warms, changes in the strength and position of the northern hemisphere jet stream will allow blocking events to become more frequent.”

Find out more by visiting the Carbon Brief blog post.

“Water scarcity is becoming an increasingly important issue in terms of overall management of water – in flood as well as drought. Likewise, the farming community is increasingly vulnerable to water scarcity both in terms of physical access and from regulation, for instance around abstraction.”

Paul Hammett joined the MaRIUS project’s steering group having been appointed as the first National Farmers’ Union (NFU) National Water Resources Specialist in 2012, the year in which the UK faced its most serious water shortage since the 1976 drought.

He says: “Farmers are at the sharp end of regulation control during low river flows, and throughout the time of the UK Drought and Water Scarcity Research Programme we’ve had a series of dry summers which has made the need for better data very real.

“Water scarcity is becoming an increasingly important issue in terms of overall management of water – in flood as well as drought. Likewise, the farming community is increasingly vulnerable to water scarcity both in terms of physical access and from regulation, for instance around abstraction.”

The value of making improved and widely available access to at-a-glance data such as the UK Water Resources Portal which shows flows in more than 300 UK rivers is summed up by the dilemma faced by a Bedfordshire farmer shortly before Paul gave this interview. Having just planted a field of winter cabbage the NFU member out of the blue received a letter from the Environment Agency ordering him to stop irrigating because flow in the River Ouse had fallen below a particular level. The following week’s weather was dry and all the plants died.

Paul explains: “Not only did that farmer lose that crop he is now concerned that his buyer will mark him down as vulnerable to drought and will take the contract elsewhere, the shock was that the river levels were so low so late in the season.

“The way he can be helped in the future will be by having more information on what the flow is like in his river and what might happen at an earlier stage – just knowing that a week in advance could have avoided this situation.

“We would like to see more value added to the research programme to give users that extra granularity in information. If they know something is going to happen, even just one week’s warning will be helpful.

“The challenge for us all is that water availability is so localised – but it is also a great opportunity for people to understand that the power of some of About Drought’s research outputs is such that it can go down to a reasonably local level and that’s exactly where we need to get.”

Like many of About Drought’s stakeholders, the challenge for the NFU has been in both staying abreast of the broad range of activities, events and outputs, picking out what is relevant to their sector and having the resource to match the scientific and academic outputs.

ENDOWS’ mission to co-develop data into usable and accessible data visualisations and products through feedback and workshops has been highly valued by our sector partners but they nevertheless say that even more could be done and that they are loathed to lose the effective community and connections that have been built.

Paul says: “Pre-programme, the NFU had existing good contacts with Cranfield University and the benefit of About Drought has been a widening of that sort of access, it has been really useful to have an improved relationship with the likes of the Centre for Ecology & Hydrology (CEH).

“The main benefits to being involved have been making sure that tools are being developed to help farmers manage the risk of water scarcity and I am really interested in what ENDOWS will do next to support the farming community in the application of the data.

DRY captured the impacts on farmers

“Also the DRY project has enabled us to capture more of the impacts of drought on farmers which are sometimes under-represented because not a lot of them are statistical.

Farming needs to take full advantage of the opportunities presented to us but farmers are basically self-employed businesses or SMEs (small to medium enterprises) and as such struggle to justify taking a day away from work to join events – it’s an issue across the board in everything we do. So we were really pleased when DRY adapted to their circumstances and set up an early evening teleconference that was joined by 15 farmers from across the country.”

DRY’s innovative, interdisciplinary and regional approach empowered farmers and rural communities to tell their stories which have been recorded as conversations, podcasts, songs and videos and are available through the DRY Utility online searchable database. Father and daughter Cambridgeshire dairy farmers David and Fran Herdman featured in one of a series of drought myth-busting videos produced by the University of the West of England talking about how their business is affected by drought.

Paul says: “It is a really good example of the benefit of the programme to the agricultural community.”

The following links to external sites and resources may be useful to businesses:

Harper Adams University has undertaken an extensive review of the impact of drought on crops grown in the UK and their response to different climate futures. This also includes a consolidation of insights for protected and horticultural crops. This report is available in draft and more focussed crop factsheets are in production.

Irrigation is an essential component of crop production to meet retailer demands for premium quality when rainfall is insufficient. Under drought conditions, irrigation can be constrained by water resources availability, with consequent impacts on yield, quality and revenue. Whilst most agriculture in Europe is rainfed, greater dependence on supplemental irrigation could become more important in humid environments due to a changing climate with greater rainfall uncertainty and higher frequency of droughts.

This interactive StoryMap explores the total financial benefit of outdoor irrigated production in England and Wales assuming no constraints in resource availability and optimal irrigation practices. The analysis suggests that the total net benefits of irrigation in a dry year are around £665 million. Map outputs highlight significant regional differences in water productivity reflecting the composition of land use and the importance of crop mix in determining economic value. A sensitivity analysis to changes in agroclimate, market conditions (crop prices) and water supply (costs) illustrates how the benefits might change under contrasting scenario. The study highlights the importance of supplemental irrigation, even in a humid climate, and the risks that future droughts and/or constraints in water resource availability might have on agricultural systems, livelihoods and the rural economy.The StoryMap is based on a paper, “Modelling and mapping the economic value of supplemental irrigation in a humid climate“.

As part of the Historic Droughts project, researchers at Cranfield University developed an inventory of qualitative drought data related to UK agriculture based on an extensive review from two weekly farming magazines in the UK, Farmer’s Weekly and Farmers Guardian for the period 1975-2018. The resultant inventory contains over 2500 records with information on the start and end dates of the event and their location to characterise the temporal and spatial extents of the cited event, together with the text describing the driver, impact or response in relation to that event. The inventory is available to download as a csv file from the UK Data Service.

This dataset is also currently being translated in to a drought impacts explorer, which allows the user to view these records spatially and to search and save according to various criteria. If you would like to be involved in beta testing of the explorer please contact nevil.quinn@uwe.ac.uk. An early draft of the explorer is available online.